The Development Bank of Seychelles was created in 1977 as a joint venture between the Government and other shareholders namely Caisse Francaise de Cooperation, European Investment Bank, DEG, Standard Chartered Bank and Barclays Bank.  During the years, some shareholders namely Barclays Bank and DEG disengaged themselves in DBS. Overtime, the shares of Standard Chartered Bank were taken over by Nouvobanq. DBS bought back Barclays’ share and Government purchased the shares of DEG, hence, increasing its shareholding to 60.50%.

DBS started operations at the Supreme Court Building in February 1978, with only eight staff members.  The Bank moved to its present location at Independence Avenue in August, 1984.  In the early days, DBS was serving mainly agricultural and fisheries sectors.  Over the years DBS’ business portfolio has grown to financing of new, modernization and expansion projects in the fields of agriculture, fisheries, industry, service and tourism, construction of commercial buildings including rental accommodation, office, storage as well as shop premises.  During the 44 years, DBS has evolved to become one of the leading financial institutions in project financing in almost all sectors of the economy.

DBS also has an office on Praslin that is operational on a daily basis, with the aim of facilitating and bringing its services closer to its clients on Praslin as well as La Digue.

DBS is a non-budgetary dependent public enterprise and operates on a commercial basis. The Bank has a strong balance sheet with a total asset of SCR 906 million. Its total liabilities amounts to SCR 532.56 million and total equity amounts to SCR 373.47.9 million.  DBS is a profitable organisation and its profit as at December 2021 amounted to SCR 8.7 million.

During the 44 years, DBS has showed the ability to adapt to market changes and demands and has not hesitated whenever necessary to diversify its services to meet the needs of its customers. From eight staff members in 1978, DBS now employ 65 dedicated staff members committed to making the vision of the Bank a reality.  The Bank is presently managed entirely by a Seychellois team.

The Bank is continuously investing and upgrading its Information Technology to ensure that good networking and effective management information system is in place so as to modernize all of its processing and daily activities. Base, on this, the Bank will be investing into a more modernised Core  Banking System to replace the outdated one which will contribute towards the efficiency and reliability of the Bank's operations bringing it up to date with modern banking technology and practices.

In 2019, the Bank undertook major renovation of its main building with the intention of creating a modern and conducive work environment for its staff.  the newly renovated building also improved customer experiences and the overall image of the Bank.

DBS also takes its corporate social responsibility towards society very seriously and continues to support activities and events which are socially acceptable and ethically driven and beneficial to the community.

The Bank also strives to maintain strong working relations with all its local stakeholders as well as its overseas shareholders and creditors.  Such relation is vital to the Bank’s corporate image both locally and internationally.

After 44 years in operation, it is evident that DBS has fulfilled to a large extent its objectives towards contributing to the socio-economic development of the country.  it is to be noted that in 2019 the Bank made history as for the first time it received an A rating from the Association of the African Development Finance Institutions for the financial year ending 2018.  DBS could not have made such progress without the support of the Government and other shareholders, the dedication and commitment of its staff members, the guidance of its Board of Directors and the patronage of its esteemed customers and other stakeholders.

The Bank has not been spared from the effects of the Covid-19 pandemic, a series of measures has been implemented, which includes a halt on capital expenditure and approval for new loans as well as a halt on employee training to name a few.

Despite the adverse impact of the pandemic, the Bank is still working actively with its partners in order to ensure continuity.  For the years to come, DBS will concentrate its efforts to assists the Government in creating an enabling environment for SMEs to remain sustainable and competitive, in the midst of financial and economic uncertainties brought about by the pandemic. It will continue to put emphasis on creating a safe and comfortable environment for its employees.  it will take the necessary measures to adapt its operations to the 'new normal'.

The Management Team consist of the Chief Executive Officer and the Heads of the different departments which includes:

Presently the Bank is governed by a Board comprising of seven Non-Executive Directors including the Chairperson. The Chief Executive Officer (CEO) who is an Executive Director makes the eight member. The members are appointed by the President of the Republic of Seychelles and this is in line with Bank’s Decree, the statutory document which details how the Bank should be governed.  The Board has the overall responsibility of overseeing the financial, strategic and other policies that are administered by the Bank and also monitors its performance.  The composition of the Board is as follows:

The appointment of the new board took effect on 1st August 2021. 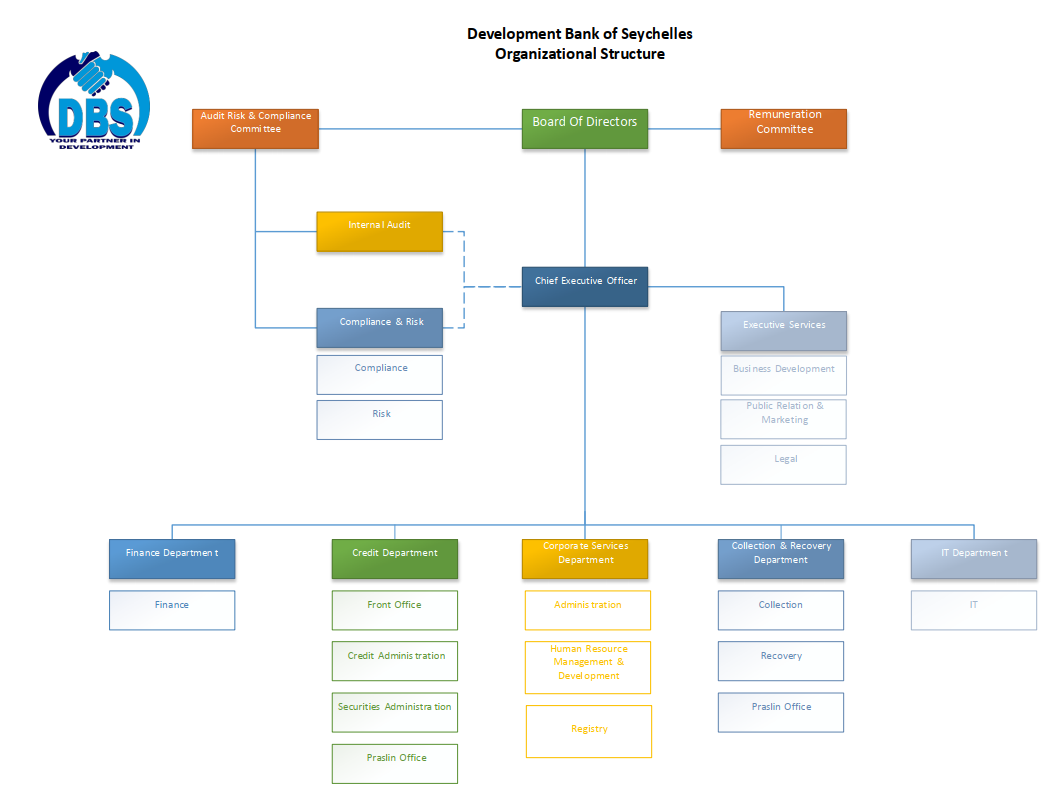